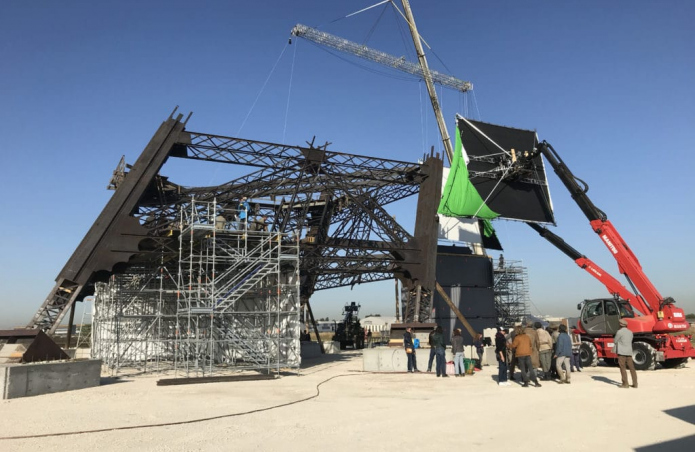 An ever more competitive studio offer in Paris Region

The National Film Center (CNC) has implemented a major plan to modernize the technical infrastructure of the film and audiovisual industries in France. A budget of 10 million euros has been released to help the most competitive studios develop and maintain their technological advances.
Of the 20 projects approved, 12 are in the region. Proof of  Paris Region's dynamism and attractiveness.

Number of studios listed in Paris Region in 2020

Between 2019 and 2020, the number of service providers in the industry based in Paris Region increased by 35%, with companies recognized for their quality and expertise. It is therefore quite natural that projects in the Paris Region have been distinguished.

Among the 12 Paris Region projects that received the label, there are

P.A.T. Solutions is a structure dedicated to providing services for the film and audiovisual industry. It welcomes preparations for filming as well as shootings. Since its creation, the company has participated in more than 100 films and 50 television series.

Smart Consulting is a strategy consulting firm specialized in the media and audiovisual industry. Among its clients are the Canal + group and AMP Visual TV.

TSF is a major player in the rental of technical means for filming, cinema, TV series and advertising production in France. In Ile-de-France, TSF operates the Studios d'Epinay and develops a project including a set of platforms and backlots entirely dedicated to filming, allowing the construction of monumental sets.

Innovation has been the DNA of our company since its creation. Thanks to grants from the Paris region, we have been able to conduct cutting-edge research programs at the European level. Today, we are in great demand by the major studios abroad for our expertise.
Remi Brun, funder of MOCAPLAB

And for the digital production services:

Since 2005, the animated children's series produced and distributed by Cyber Group Studios have been among the top-rated programs of broadcasters and have received multiple international nominations and awards.

Ellipse Studio is the production studio of the Media-Participations group. European leader in animation production (series, feature films, transmedia content), Média-Participations has been producing programs for more than 30 years in a variety of technologies and graphic styles, always with a view to innovation and renewal.

MIAM! Animation was chosen for its innovative, integrated and environmentally responsible production pipeline. Specialized in the development of high quality hybrid and animated programs, the company has often seen its programs nominated in the most important international festivals. The series L'amour a ses réseaux recently won an award at the prestigious Ottawa Animation Festival.

As an independent animation studio producing entirely on the territory, TeamTO has always relied on innovation to remain competitive in an international market. With an integrated R&D department, half of the staff is dedicated to the development of tools for computer graphics artists, or high value-added business software, while the other half works on improving production pipelines.

"Our project aims to transform our studio by scaling up to 2024 to meet the growing demand of the international market for high-end animated productions. We want to meet sustainable development goals by building a studio that will have a 63% smaller carbon footprint, while remaining innovative, and creating jobs, all while continuing to carry our values of parity and diversity."

Atlas V is a new production company specialized in virtual reality. Co-founded by four experienced producers, its works have already been selected in many international festivals, and the series Spheres received the award for the best immersive work at the Venice VR 75 Festival.

The Paris-based company already collaborates with the biggest players in the film industry and American platforms, notably with Netflix on Nicolas Ajar's latest film Oxygène, which Film Paris Region was able to accompany during filming in Ivry-sur-Seine.